Make-A-Wish's Gaming for Wishes is Tonight!

Today is the big day! Join us from 5-8pm ET as the @PacersGaming play NBA2K, Fortnite, & Minecraft with wish kids for @MakeAWishohkyin’s Gaming for Wishes. @Kjonair will be hosting! :D

Get collectible wish kid trading cards that were created by us and support this wonderful event.

In order to support this growth and better serve you, we are upgrading and migrating our infrastructure. During this time we may have limited service interruptions. Esports and gaming organization Global Digital Sports, LLC., in partnership with esports analytics company Harena Data, Inc., has today announced the formation of the American Youth Soccer Cooperative for Esports (AYCE), an organization aimed at bringing collective esports leaders together to improve the industry as a whole. As a cooperative, state associations can coalesce and scale the force of their esports programs and tap into national sponsorship more effectively. Indiana Soccer Association and leading esports and gaming sabermetrics platform GYO Score have partnered to announce the “Keep Kids Playing” campaign, an effort to enable Indiana Soccer’s youth soccer organizations to continue playing with their teammates in esports competitions during Indiana Soccer’s Coronavirus outdoor soccer suspension. Clubs and players will register for free on the GYO Score esports platform and the Champions eLeague Series will then provide an outlet for soccer players & coaches to remain connected, compete, play and learn within a safe, digital environment. The Correlation Between Esports and Desired College Majors

A recent study developed and hosted on GYO Score reveals esports athletes are more inclined to pursue college majors in STEM than any other field. The GYO survey was conducted as part of their recruiting profile creation process and involved 1,156 esports players at both high school and collegiate levels who completed all or some of the demographic survey questions. 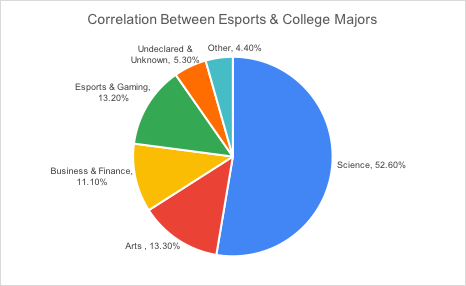 The report found that athletes were interested in business and finance majors with nearly 11.1% of respondents saying so. The field includes majors such as:

The GYO platform study found that only 24.4% of esports athletes are interested in business/finance and arts degrees (13.3%). Arts degrees include majors such as: 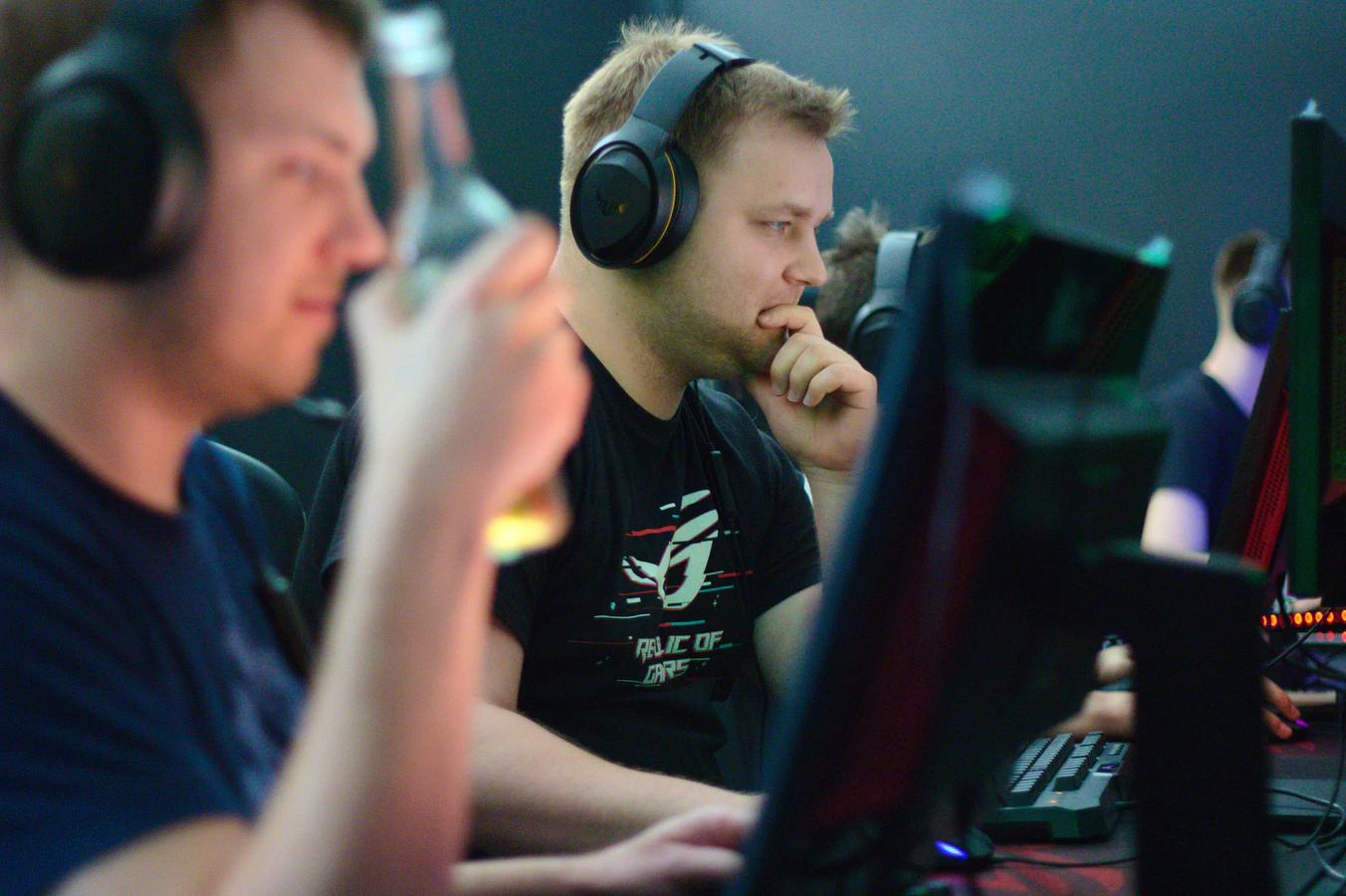 Photo by Anthony Brolin on Unsplash

When compared to traditional athletics, esports players appear to have a higher variety of desired majors and study focuses than athletes pursuing a path with traditional sports such as football and basketball.  In 2016, a Bleacher Report study found college football athletes pursued degrees in business/finance and arts/social sciences much more heavily than degrees related to STEM degrees. Due to the methodology of the Bleacher Report study, direct comparison is not possible, as they have provided results with differing major groupings that are incompatible with the GYO study results.  However, the Bleacher Report results do show a much higher percentage of college football athletes gravitate towards business and social sciences than STEM-related majors, with only 9% of studies athletes falling into the “Arts and Sciences” category of the study

These findings are supported further by a study on major “clustering” by traditional athletes as published in the Journal of Intercollegiate Sport, 2010.  In the study, the authors, Sanders and Hildenbrand, point to the clustering of traditional athletes towards the social science majors.  This effect appears enhanced when the athletes pursue high-profile sports such as college football, men’s basketball, and women’s basketball and is also influenced by race and gender of the participants.

The Concept of an “Esports” Major

With esports becoming a prominent form of entertainment, esports athletes are keen on the idea of entering an esports collegiate program or gaming-related major. Approximately 13.2% of surveyed athletes would be interested in a major related to gaming and esports.  As “Esports” is not currently a major with a clear delineation in most major institutions, the study noted a variety of write-in responses that were counted towards the “Esports & Gaming Major” category featured in this study. Some of the included responses were “Esports Player”, “Esports Coach”, and “Esports Management”.

For these players, they may be seeking study options that are similar to “Sports Management” programs which are significantly popular with traditional athletes. While further study is warranted in this case, there does appear to be a strong desire among respondents to somehow study a field in college that allows them to stay within the esports industry section following graduation.

Finally, 5.3% of respondents listed Unknown or Unsure about their interested college majors and 4.4% have been categorized as “Other”.

The full report can be requested below for academic professionals and students with an eligible and active email address registered to their school or academy (jon@university.edu).

GYO Score is an esports and gaming sabermetrics platform that seeks to discover gaming talent early and often through advanced statistics processing. This report collected responses from 1,156 GYO platform users via a scholarship recruitment survey. It’s important to note that data presented in this study relied on player self-reporting, which can introduce issues such as, but not limited to, selective memory and exaggeration. GYO grouped together majors when results were similar enough to one another to reasonably assume the answers were the same (i.e. “Computer Science” and “Computer Sciences” answers were grouped together, as were “Criminal Studies” and “Criminology”). GYO removed data that appeared to be erroneously entered or captured, such as dates out of range and improperly formatted answers.  Statistical testing was not conducted in this study, and the research conducted was exploratory. Future research could explore other behavior. Nearly two years ago, the initial GYO founding team sat around a table and discussed a simple concept: esports needs more support for the dreamers of esports. The pros have plenty of support, but what about the players who dream of one day following those footsteps? For those players, there were not many resources.

Flash forward and after a year and a half of development, GYO officially emerged out of Beta and has since been on a tear – adding nearly 600 new player accounts per day. Our messaging is simple: if you have a dream to pursue a path to the pros and/or esports scholarships, and we’re here to serve you.

The Fall Combine Has Ended - What's Next?

The Fall Combine is officially in the books, and our data dragons are now crunching the numbers while our data evaluators take a look at your performance.  Here's what to expect next as we move forward.

The one where we launch the end of year combines, introduce a lot of new features, and generally get ready for bigger things for GYO Dashboard.

Prepping for Splitgate and the GYO Dashboard

On the first of March, GYO launched its first global esports combine which ran for a period of ten days and was held in over 350 LAN gaming centers. After several weeks of combine data analysis, over 120 scholarship and team offers have been sent to players around the world, with more offers expected to be sent this month. The goal of the combine was to help players get discovered and provide players with a skill baseline and play analysis profile in order to improve their play. Moving forward, future combines will involve more direct recruiting at the scholastic levels of play, based on the success of the first.

What's Next for GYO and the Combine Players

From March 1 - 10, we decided to do something a little crazy.  In the spirit of helping players pursue their dreams of esports stardom, we tried to activate over 350 gaming centers around the world with the support of our partners like ggLeap, E-Blue, and Infosys.  We didn't know how this massive esports star search would go.  To be frank, a lot of it was a test of our systems and player interest.  Well, we learned quite a bit and we were absolutely humbled by the response.  Over 1,400 of you signed up to participate and several hundred of you played thousands of hours of games and the data we collected has been enormous.  Thank you to all who participated, gave us feedback, and are going through your combine result now.

Indianapolis, IN – January 29, 2019 – Indiana-based Harena Data has announced the first of a quarterly series of esports scouting combine events that will invite players from around the world to compete and test their gaming skills in order to find professional esports opportunities and collegiate scholarships.  The first GYO Esports Skills Combine will take place over the course of ten days, from March 1 – March 10.  Over 350 video game centers worldwide will become recruiting hubs and scouting locations for the event and will invite participants to compete in their local or regional gaming centers for prizes, notoriety, and future pro contracts, much like a “Star Search” for esports.

Want to rally fellow gamers to your team or group? Create a free group profile page on GYO.

Which One Do I Choose? I feel extremely blessed most certainly. It has been absolutely incredible to receive a scholarship offer for playing a game I love - it's like a dream come true. I'm definitely going to be keeping up on GYO.

You never will really succeed if you keep hanging back. You got to go out and try things. You can’t always be skeptical about everything you see.

This is a good opportunity to get into the league scene and hopefully go pro, but also a great chance to get my college degree.

If you feel like you want to pursue this, then you really have to take that leap of faith and play to your best abilities.

It was really cool to get these offers from both these places. I never really had that before. And if there were any opportunity to make something of my talents and video games, I would be all for it. I’m going to enjoy it while I can and earn my degree.

There’s no real downside to it (GYO). If you're going to be playing the game anyways, might as well get something out of it!

I was SHOCKED! I didn’t think I even did this properly; I didn’t think I was going to get anything from this. Fast forward, and I woke up to an email that I had someone trying to contact me!

When I played ranked, I would occasionally get contacted by college recruiter, but nothing would happen. But through GYO, it's really good because it allows them to come see you and directly see your stats and find easier ways to contact me. It really helps your name get out there.

Before GYO, I only opened my own doors to competing at my university. However, after one semester, I decided I needed a new home. GYO was a bridge for me to get my talent out of my box, and into the eyes of many.

I got contacted by five coaches for a number of colleges. Thank you GYO for helping me view myself in a new way and opening doors I couldn’t by myself.

Show them! It doesn’t take much time! All you got to do is log on, play a few games, and your stats will speak for themselves! When you have places like GYO, take advantage of that!

The little time I have to play games, it definitely worth the time to invest in sites like GYO.